This page is regularly updated, please select here to view the latest version.

I think I’m reasonably good at identifying native trees when they’re in leaf, but it’s not nearly as easy in the winter……or so I thought. I decided that on my occasional forays during the latest lockdown, I would set myself the task of trying to learn how to identify trees at this season. And luckily, there are quite a few species of our native trees that can be seen at the Rec.

Probably one of the easiest trees to identify at any season is the ubiquitous silver birch. 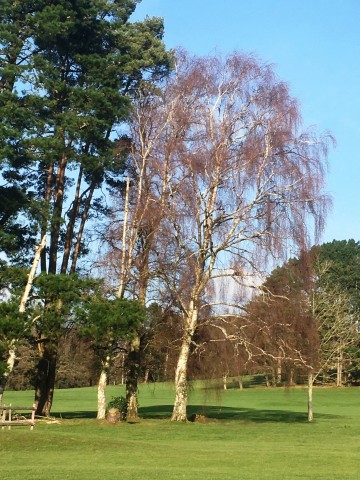 select any image to enlarge it

But it’s in the winter that its elegant outline and white bark shows up to best effect. The white skeleton of the trunk and branches terminate in long twigs that cascade downwards and have a beautiful reddish tinge. The male catkins which form in the autumn, are also a reddish brown, and add to the warm colouring of the crown. A group of silver birch trees caught in the light of the fading winter sun really are a stunning sight. You’ll find one or two of them at the Rec.

Another tree that adds colour to the treescape in winter is the alder; a tree that favours damp areas such as river banks, and the dog walking area at the Rec!

It is a slender, conical tree. The twigs and buds of the alder have a purplish hue which again shows up beautifully in winter sunlight and is likewise enhanced by copious purple, male catkins. But the feature that really clinches the identification, is the presence of lots of small brown cones. These are the spent female catkins that formed in the spring and having shed their seed, stay on the tree throughout the following winter. Alder is the only native deciduous tree to produce cones.

Beech trees give themselves away by their smooth grey bark, spindle shaped leaf buds and most obviously, their crumpled, copper coloured leaves which they usually retain over the winter.

We don’t have a large specimen of this ‘Queen of Trees’ at the Rec, but all the identifying features can be seen in the beech hedge that adjoins the garden area.

The most significant means of identifying the winter ash is the colour and distribution of the leaf buds. They are a sooty black, and conical; those at the ends of the twig are much larger than the others which are arranged along its length in opposite and

alternate pairs. Some of the winged fruits of the ash tree may still be clinging on throughout the winter to aid identification. 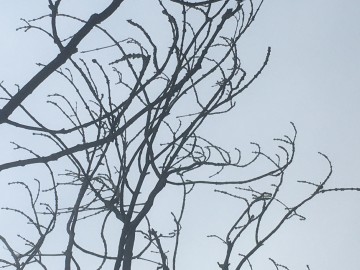 These will occur as ripened, brown bunches known as keys. Another feature is the growth habit of the ash; the twigs ‘fall’ and then sweep upwards at the tip, ending in the distinctive ‘witches claw’, complete with black finger nails! Stand beneath the ash tree in the Rec (at the far corner of the playground) and let your imagination do the rest! Unfortunately this wonderful tree is now at severe risk as a consequence of a fungus that causes ash dieback and is decimating the population throughout the country. I fear the ash at the Rec may be amongst the victims.

And not to forget the mighty oak. 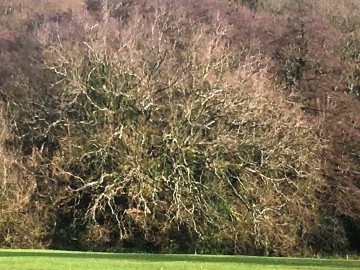 Mature trees growing in open conditions have a very distinctive profile with a wide spreading crown that almost reaches the ground. The gnarled, twisted branches snake outwards and are often covered in lichen and mosses, adding to their aged appearance. We don’t have such a large specimen at the Rec, but there is a small oak tree near the playground, as well as a number of saplings in the garden area. Like the beech, they may still have some dead leaves clinging to them, and the buds of the native oaks are quite distinctive. They are orangey in colour and the terminal buds occur in clusters, each one being covered in a number of overlapping scales.

These are just a few of our more common native trees and you may like to check out some of the others. There are good identification guides online, one being that provided by The Woodland Trust. As well as protecting our existing woodlands and creating new ones, they are keen to get as many people as possible involved in helping to monitor the health of our trees. It’s only through understanding the spread of deadly pathogens, that scientists are able to formulate plans to deal with them. If you feel able to help out, Observatree runs a number of ‘Tree Health Citizen Science Projects and Initiatives’; not the catchiest title admittedly! This includes a project on monitoring ash dieback and identifying trees that show resistance. There’s no doubt that the loss of ash trees in our countryside will have a major impact, so anything we can do to help will certainly be of value.